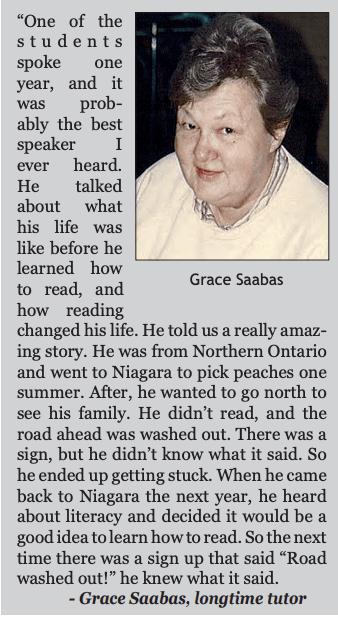 Grace Saabas, long-time literacy volunteer, passed away last week, shortly after her 90th birthday. Her pioneering work in the literacy field is a significant part of her legacy.

Born an only child from Tavistock Ontario, Grace graduated from Christian Education at the University of Waterloo in 1958,  as well as the Mother House in Baltimore, where she developed a lifelong passion for education, literacy and church work.

As a member of the Lutheran Church Women, Grace first heard about the Laubach Literacy movement in the early 1970s, and took her first tutor workshop in 1972 through the St.George’s-Tyndale Parish House, a Neighbourhood Centre in Montreal. She tutored there for several years, and eventually joined the RECLAIM Literacy Council in Montreal.

Grace served just about every role imaginable in the literacy field, always as a volunteer. First and foremost, Grace tutored adult learners, an important role that guided her in her work.  She became a Literacy Trainer (and Supervisor). She led the national Training and Certification Committee to train and certify Literacy Trainers and establish national training standards. She served as  President of RECLAIM, Laubach Literacy – Quebec (now Literacy Quebec), Laubach Literacy of Canada (President 1993-96) and was the Canadian representative to Laubach Literacy International (now ProLiteracy).

She organized conferences, workshops and meetings with Senators, MP’s, Governors General, volunteers and learners. She treating everyone with the equal respect, and her trademark dry wit.

Grace was a mentor and a friend. I first met Grace in Bedford, Quebec in 1989, when I applied for my first job in literacy, as National Development Officer for Laubach Literacy of Canada. Grace interviewed me, as part of her role as Director of the organization. She was willing to take a chance on a recent arrival from Toronto, with a recent Bachelor’s degree in English Literature and no relevant experience. She provided the support and the opportunity for me to learn and to grow into the position.

Over the next three decades, Grace taught me about adult literacy, the important role of volunteer action, and the meaning of service to the grassroots community. Her mentorship shaped my own approach to literacy work, and life.

I apprenticed under Grace to learn the ropes of a model of literacy education based on the Each One Teach One philosophy. I watched her in action, as we travelled around Canada in the 1990’s, doing field work, at a time when the federal government, under the National Literacy Secretariat, supported a humanistic approach to adult literacy.

Married to (the late) Reverend Helmut Saabas, Grace was mother to three sons, John, Paul and Andrew, grandmother to seven, and great grandmother to two. Grace and Helmut opened their home and their hearts to guests from all over the world, through their implication in church work, education and literacy.

I am blessed to have shared time with Grace, to have learned from her, laughed with her, stirred up some adventures, and shared a glass or two of scotch! 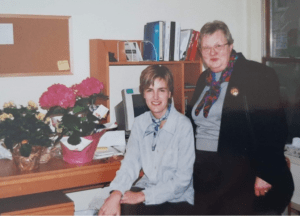 My hope is that I can honour Grace’s  memory by providing mentorship and support to others who enter the literacy field, a place I have called home for more than 30 years.

Thank you, friend, for your many contributions, and for being one of a kind. You made a difference!

With love and respect,

We firmly believe that the internet should be available and accessible to anyone, and are committed to providing a website that is accessible to the widest possible audience, regardless of circumstance and ability.

To fulfill this, we aim to adhere as strictly as possible to the World Wide Web Consortium’s (W3C) Web Content Accessibility Guidelines 2.1 (WCAG 2.1) at the AA level. These guidelines explain how to make web content accessible to people with a wide array of disabilities. Complying with those guidelines helps us ensure that the website is accessible to all people: blind people, people with motor impairments, visual impairment, cognitive disabilities, and more.

This website utilizes various technologies that are meant to make it as accessible as possible at all times. We utilize an accessibility interface that allows persons with specific disabilities to adjust the website’s UI (user interface) and design it to their personal needs.

Additionally, the website utilizes an AI-based application that runs in the background and optimizes its accessibility level constantly. This application remediates the website’s HTML, adapts Its functionality and behavior for screen-readers used by the blind users, and for keyboard functions used by individuals with motor impairments.

If you’ve found a malfunction or have ideas for improvement, we’ll be happy to hear from you. You can reach out to the website’s operators by using the following email

Our website implements the ARIA attributes (Accessible Rich Internet Applications) technique, alongside various different behavioral changes, to ensure blind users visiting with screen-readers are able to read, comprehend, and enjoy the website’s functions. As soon as a user with a screen-reader enters your site, they immediately receive a prompt to enter the Screen-Reader Profile so they can browse and operate your site effectively. Here’s how our website covers some of the most important screen-reader requirements, alongside console screenshots of code examples:

We aim to support the widest array of browsers and assistive technologies as possible, so our users can choose the best fitting tools for them, with as few limitations as possible. Therefore, we have worked very hard to be able to support all major systems that comprise over 95% of the user market share including Google Chrome, Mozilla Firefox, Apple Safari, Opera and Microsoft Edge, JAWS and NVDA (screen readers), both for Windows and for MAC users.

Despite our very best efforts to allow anybody to adjust the website to their needs, there may still be pages or sections that are not fully accessible, are in the process of becoming accessible, or are lacking an adequate technological solution to make them accessible. Still, we are continually improving our accessibility, adding, updating and improving its options and features, and developing and adopting new technologies. All this is meant to reach the optimal level of accessibility, following technological advancements. For any assistance, please reach out to